Home » Blog » Research Shows some Interesting Side Effects to Smartphone Use

Research Shows some Interesting Side Effects to Smartphone Use 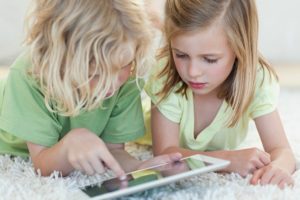 Since the middle of the 20th Century, we have experienced a virtual explosion of new technologies. It seems like every decade has brought about significant advances that have changed the way we live. Think about it. When was the last time you actually sat down and wrote a letter, or even sent a card to a loved one? Today, we keep in touch over the internet, via email, or through texting.

The use of “smart” mobile devices has been one of the most noteworthy steps forward to occur in the world. Rarely do we go anywhere anymore without being “plugged in.” Having a mobile device handy can take a lot of stress out of our day. According to research, though, our chronic use of these devices could also be doing some damage, especially in children.

Research on Smartphone Use
A few years ago, a Korean study released some interesting data collected during a study of just under 300 school-aged children. The children who participated in the study were placed into a particular grouping based on the moistness of their eye surface. One group consisted of children with moist eyes (the control group). The other two groups contained children with either neutral, or normal, eye lubrication, or those with dry eyes, as observed in a brief exam.

Once children were in their particular group, they were asked to complete questionnaires regarding their usage of mobile devices, computers, and television. In addition to outlining the various devices they used, children estimated the amount of time they spent each day using the devices they listed. According to the study report, 50% of the children in the control group regularly used a mobile device. In the group of “dry-eyed” children, 71% had daily screen time on a mobile phone, texting or performing other tasks. Researchers concluded that the use of mobile devices should be recognized as a risk factor for dry eyes in school-aged children. Interestingly, the amount of time a child spent watching television did not seem to correlate with the moistness of their eyes.

Most adults recognize that the eyes can become fatigued if too much time is spent in front of a computer. Since Smartphones seem to be the new norm, it is also beneficial to follow similar guidelines for usage in order to protect the eyes from unnecessary strain.

Is it time for an eye exam? Contact Roholt Vision Institute for a visit with our friendly team.